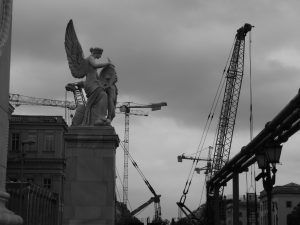 11th June 2012: I will shortly be leaving to cross Eastern Europe on the way to ‘the Babayan Culture house’ art residency in a fascinating area of cave complexes in central Turkey. I will be documenting the changing architecture and culture and people by taking pictures and sketching whenever possible to make up a collection of work based on the theme the ‘West meets the East’.  This will be started from my cave studio in Cappadocia and hope to show the work at the end of the residency in some form and then in a gallery in the Uk. The journey will involve going by train via Berlin, Prague, Vienna, Budapest, Belgrade, Sofia and Istanbul to mid Turkey.

13th June 2012: What is interesting about Berlin is that it is a city still defining itself and changing rapidly. It has the cafe culture and glamour of parts of Paris, the laid back peddle power of Amsterdam, while embracing the quirkiness and creative spirit of parts of London. A capital of cranes amongst the neoclassical sculptures. A surreal sculpture of man on an old bike with a tall tree resting on the back was one of my favourite sites today!

The piece ‘Berlin’ is of one of the main streets leading up to the Brandenberg Gates, I liked the way the cranes seem to grow rather elegantly out of the old buildings. Tourists from all over the world rushed past in an attempt to ‘do’ Berlin in a day while a cycle taxi driver unconcerned with touting for trade spreads out on the back seat and became absorbed in his newspaper. Sketching always provides a good opportunity for watching and contemplating while the world speeds around you.

16th June 2012: Berlin is seeped in history, old and new architecture combine with interesting results. I particularly liked the pink water tunnels which passed over the roads like some huge contemporary sculpture. It was a good place to begin the journey.  However home to over 440 galleries, and some 10,000 international artists, there is a lot to see and its difficult to even get started in a couple of days. Described as having an  “Adolescent energy, restlessness and experimental spirit combined and infused with an undercurrent of grit are what give this ‘eternally unfinished’ city its street cred.”

18th June 2012
Prague, a fairy tale land of spires and towers it’s with
interesting sites, details and statues to sketch around each corner. The climate has heated up quite abit since Berlin which means the paint is drying quite quickly, this can be useful in that you can add layers quickly and spontaneously however, you can’t work back into the piece so much. It also means that oil pastels, usually one of my favourite things to use when on the move are sticky and messy. Sketching a lot can feel cranky at the beginning but then you start to get the satisfying feeling of the work becoming more fluid, natural and automatic. Once this happens less time is required looking at the paper and more time spent can be spent looking at the object and all the little details that make it what it is and the atmosphere and energy is more likely to be transferred into the piece.

21st June 2012:
My final day in Prague I decided to explore the contemporary art scene further and finish a couple of sketches started before. I discovered just a few doors down from where I was staying, a huge old palace which had been taken over by a creative collective showing artist’s work.

The more impressive work was at the bottom of the building and as you worked your way up the ideas became whimsical  and the English translations more intriguing. The dilapidated building was interesting though and in places you wondered if old electrical plugs, sockets and stains on the walls were pieces of artwork.

I peered through a small keyhole of a large door to find a forgotten hall of incredible Baroque grandeur held up by scaffolding. Following this I went back up to a park away from the crowds, with views of the castle and the skyline of Prague, to try to finish off a couple of pieces that I had started the day before, but by the time I had got up there the light was fading with an oncoming storm murmuring ominously in the distance and the first rain running the colours over the page.

5th July 2012: Belgrade, is a friendly city with fewer camera wielding tourists too.

The architecture is interesting, from 100m out of the train station you are faced with two enormous buildings, bombed on a two decades ago, which were former army barracks and now walls hang precariously over where you walk, but they remain to serve as a reminder of the controversial bombing atrocity that took place but also as the country is in deep economic crisis and does not have the funds to rebuild at this time.

The economic crisis is also reflected in the arts, the national gallery has been closed for the past 7 years and the contemporary art gallery seemed to be closed too. There were a couple of private galleries but I think artists would have to travel to other countries to have much opportunities to show their work. I managed to get quite a lot of sketching done and was inspired by the eclectic architecture. Wondering the streets you get to see the contrast of old buildings, art nouveau details copied from Vienna, reflected in shiny new skyscrapers. The view over the river Danube was interesting too seeing rusty dredging boats and buildings layered on top of each other. The vast bridges spanning the Danube are important symbols for the Serbians to the extent that when they were threatened with being bombed people flocked onto them to defend them with their presence.
While sketching in the main square I had an interesting chat with the very lively and engaging Ecuadorian consul who was intrigued by my drawing of a huge domed church and shortly afterwards a drug dealer who proudly told me about his 5 jail sentences!

10th July 2012 Istanbul, a fascinating fusion of architectural styles and people. The mist often lays over the river, while minarets, ruins and apartment blocks rise out from the other bank. This time I stay on the Asian side of the Bosphorus which served to reinforce my inspiration and intrigue of this city of stories and influences. Further down the river from where I was staying is a little mosque of Neo-Baroque style named ‘Ortakoy’. Behind it is a relatively new bridge that towers above it and streams with traffic however, it finds its own tranquility right by the banks of the river. Both intricate and delicate details adorn its façade but the shape is simple and well proportioned. This is building I have painted a number of times and feel very drawn to, the other building I have revisited a number of times is the Aya Sofia. The domes, details and colours and how it changes so much during the day are interesting. Also the different uses of the building which has been a church, mosque and museum.

July-August The residency at the Babayan Culture house in Cappadocia was very interesting and a hive of activity with other painters, filmmakers and poets there. It was interesting to see how everyone on the residency responded to the influences of the area in such different ways. During my time at the residency I hoped to experiment with different materials found in the area and try out new techniques.

On one morning we had fun helping one of the artists Ted hiding little unfired ceramic sculptures in nooks and crannies amongst the caves. Passersby would soon be questioning whether this was art or a natural occurrence as these efemoral little figures broke back down into dust.

There was usual scenes everywhere, I spent the first couple of days investigating the area to find good spots to paint from and to try and get some understanding of the functions of the bizarre series of caves, pigeon houses and tunnels through the ground and up into the rock. There were mysterious carved out windows in the centre of solid looking rock, exposed rooms where part of the rock had completely sheered off and Greek ruined buildings. The arches and alters of beautiful old churches carved into the rock still remained in some places with simple paintings inside them of Christian symbolism, delicate abstract patterns and everyday life such as chickens and plants.

The reds and oranges of the pictures seemed to be the pigment that had lasted the exposure to light. The rock was very soft and due to storms and wind, impressive rock formations had been created.  I tended to work in situ in the morning when it was less hot then retreat to coolness of my cave as the full midday heat took hold and painted from photos and sketches then the two hours before the sun set to get out go out and explore.

An area that I have kept returning to to paint is looking back cave openings of balconies and doors in the cliff. My studio lead out into the middle torquoise door through a little passage in the ground. I liked the combination of shapes that had been formed from years of natural erosion and the details and colours of of human habitation. (see below) The village was wonderfully undeveloped and felt like it had changed very little.  The work of the donkeys had in some cases been replaced by small tractors but other than that the majority of the people continued to live off the land having little plots of ground around the village for fruit and vegetables. It was the beginning of the apricot season when I arrived and as time went on the flat rooftops of the houses (and in my paintings) became more and more covered with the deep orange colour of drying apricots. This was an impressive scene when viewed from above.