“I’ll be heading into a little frequented remote valley, only accessed in the winter by taking a spectacular ancient trading route along a treacherous semi frozen river torrent in a dramatic gorge to sketch, paint and document the beautiful houses, people and monasteries rising from the craggy clifftops”

And so the Journey begins to Ladakh in Northern India, an area strategically placed between Tibet, China and Pakistan. Inspired by previous journeys to the area and seeing the work of French photographer Olivier Föllmi (below) who has documented some of this stunning area, it has taken afew years of preparation for this trip to finally come to fruition.

The most breathtaking flight of my life over the Himalayas, K2 and other significant peaks emerge from the clouds in the distance.

Also one of the most bizarre as the whole flight is filled with army personal being stationed to defend the borders. The affable seat neighbour with scars of previous conflict on his face tells me dejectedly how cold and miserable its going to be though unlikely to see any action on this mission.

The knots of anxiety about the forthcoming trip start to dissipate as we arrive and I’m welcomed by an old friend. Hotel, sleep explore, heading up to the old temple on the mountains above. 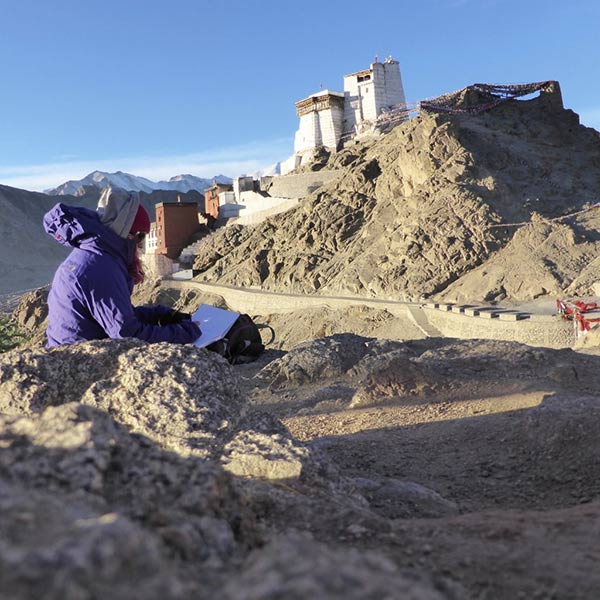 Feel blissfully happy winding my way up the path surrounded by the mountains above and snow flanked peaks behind with a deep blue sky and masses of praire flags flying in the wind. There is no one much around other than the odd scraggy but rather adorable looking dog curled up against the biting wind, they are totally docile during the day but turn into rabid beasts best avoided by night and I’ve been advised to return by 5pm before it gets dark. I sit up on the high rocky ridge and start the sketchbook of the journey initially based on Namgyal Tsemo Monastery and the fort below it.

A few days later and we are hurtling out of Leh the capital of the state and heading West, stopping at one point to gaze down to where the Indus River, which goes all the way down through Pakistan meets the turquoise Zanskar river. After crossing a bridge we will be taking the right hand track up the Zanskar from here and the adventure will begin.

We speed along a narrow, rocky and highly precipitous bumpy route on the side of the river as we head up to where the route and the ice begins. Then come to an abrupt halt, bags are thrown off the roof, dust is flying everywhere and we are off! My guide the affable Stanzin smiles or breaks into laughter at every moment and during the journey is incredibly attentive in ensuring that come what my I will survive this journey!

The Tibetans who I have met on the journey and previous ones are some of the warmest and most amicable people on earth. He quickly gets to work showing me how you are going to have to shuffle like a penguin to retain stability and can even do this at quite high speed though I never get away from the feeling that you are only a second away from sliding over, which happens frequently.

Those who are used to being on the ice are able to go fast and I ended up having to run and skate to keep up with them. He tells me about his village and his large family and growing up in the Zanskhar valley. He was now studying to become a monk, this takes many years of training and meditation and learning. The vocation has become harder to avoid the temptations of the modern world, to practice abstinence and refrain from excess.

Surrounded by huge cliffs towering up around us, we camped at night on the sandy beaches next to the river. There are also caves in many places, where people travelling the three days take their children to school, or access the outside world to trade at the end of the winter would sleep or shelter. They look impressive adorned in furs and sometimes beladen with turquoise jewels and often with a sledge which copes better on the ice than anything else. The caves around also made for a good position from which to sketch from. I sometimes used sand from the rocks and dried foliage in the pieces. You had to work quickly as not only would your fingers quite quickly freeze up but but also you paint brush. 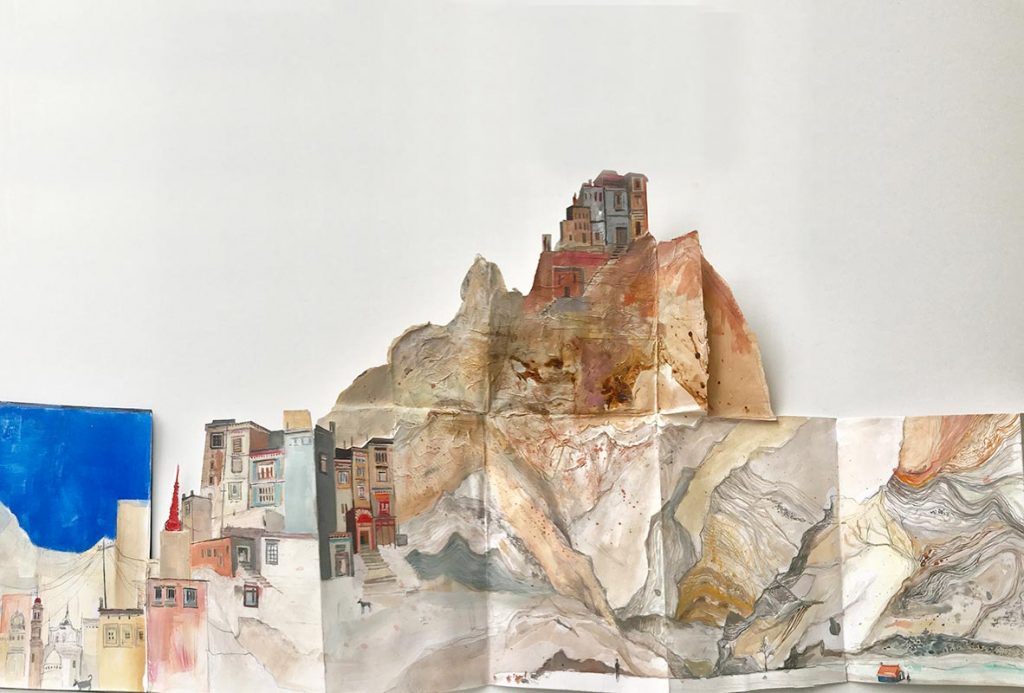 My guide was intrigued by the pictures and he told me more about the Buddism imagery and the power of an image and significance of the making of this imagery. I remembered visiting Norblinika in the foothills of the Himalayas where training is offered to Tibetans to pass on the knowledge and artistic techniques of Tibetan Buddist culture. I talked to a ‘Thangka’ painter who described the painstaking years it would take to progress. Days and even weeks were spent just in perfecting every element, for example an eye so that every angle and line is just right. This takes you back to considering where the motivations of the maker in different cultures lie and that so much of the worlds most intricate and dedicated work has come emanated from religious sources.

By the third day our journey had started to become trickier, the ice on the river had not frozen sufficiently for us to pass and disappointingly we were unable to carry on up the river. Stanzin said we will wait overnight and try to pass the next day, if the night has been cold enough. We wake early and with trepidation make our way to the thin strip of ice next to the fast flowing torrent. One by one on all fours we carefully crawl on the ice under the rocks, thankfully it holds. The next stage climbing on the cliff edge we manage to enter the Zankskar valley. From here I start to explore some of the villages around sketching when possible, people are welcoming, friendly and somewhat curious.

I show them the concertina sketchbook (above) being created and explain how I’ve come from Leh, the capital through the gorge. I always try to have extra drawing sets to give away when sketching and it can be fun sometimes to find yourself surrounded by young artists observing the world around them without inhibitions. Interesting too for me to see what people or children are interested in depicting too.

This adorable little lot came to join me while I was sketching their house, (above right) commenting on every brushstroke! It was a quick sketch using a pencil and the earth on the ground mixed with water, (which they found very funny!) However, I finally had to abandon ship when my paint brush started to ice up before I could use it. 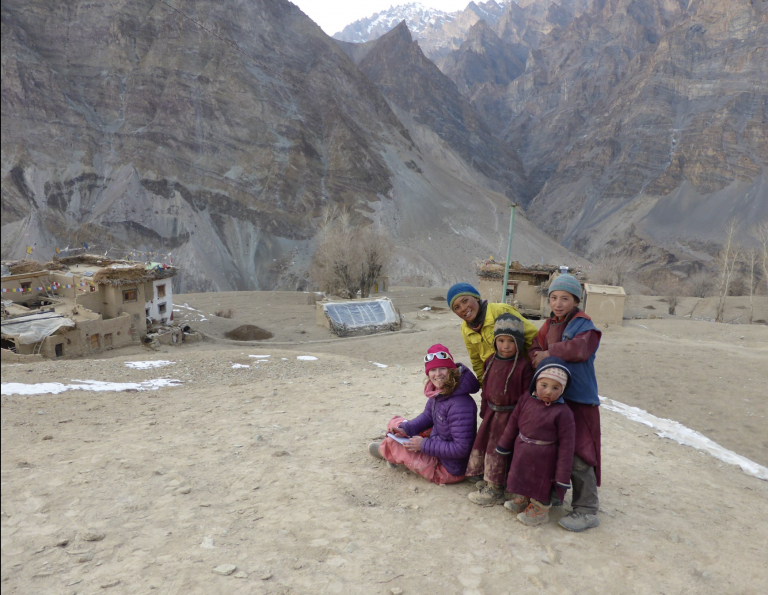 A particularly memorable moment was being invited into Karma’s house, I had been drawing it up on the hill she was insistently waving and beckoning for me to come in. I followed her as we fast descended from the open outside courtyard in the centre of the house down into what for a moment was a completely dark cave and I wondered if I was about to be kidnapped. 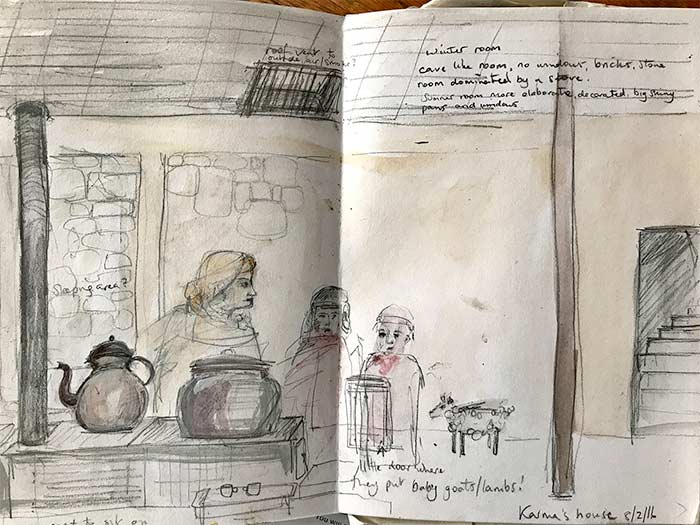 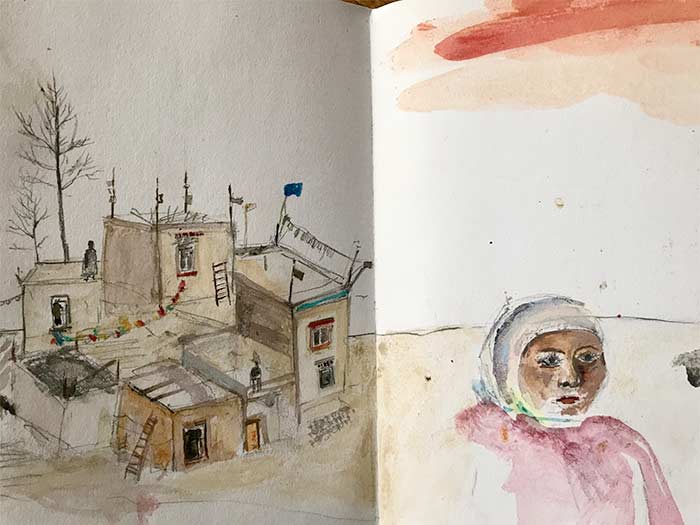 Then candle light and we are in the winter room, deep inside the belly of the building, no windows but a blackened stone cave like room, dominated by a stove and soon little children and baby goats all descend into the warm caccoon like space, running around squealing in a chaos of delight. That night as I make my way back to camp I flashed the torch to find two large feline eyes watching me reflecting the light, before bounding away into the darkness. I’ll never know if this was the illusive snow leopard.” 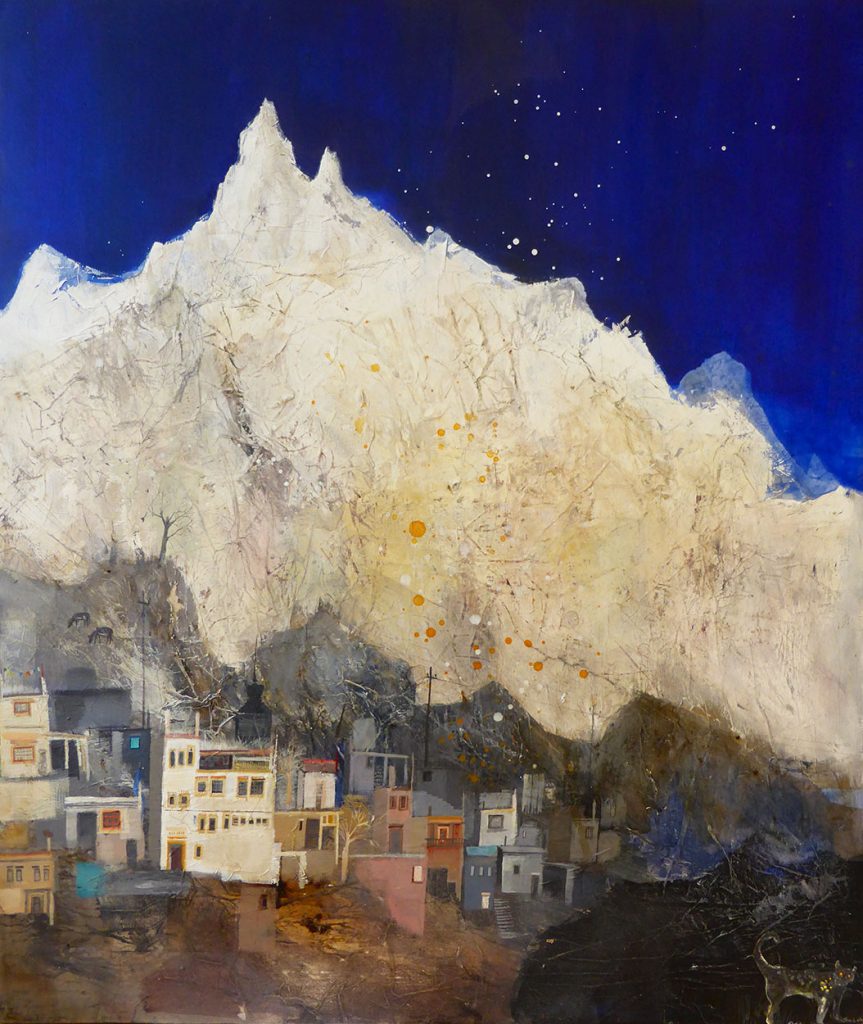