Emmie is a mixed media artist whose inspiration comes from journeys, mystical tales and the bizarre sights she has encountered. These may be the crumbling beauty of Cuban buildings, the sensory kaleidoscope of India or the time echoing features of Istanbul. Magical realism is an integral part of Emmie’s art, which may start out based on one place but ends as a coalescence of memories from the past, sights of the present and thoughts of the future…

Her work often examines the transitory nature of architecture from its planning and construction to its ruins and structure revealed. It has been said that a building is ‘a volume of human history, holding within its pages the stories and secrets of generations past and present’. The world the artist creates is one in which buildings both within and without are permeated with the disparate details of the lives of their former inhabitants.

If variety and contrasting scenes characterise the choice of subject matter, variety is also reflected in the materials used, with anything from coffee to gold leaf, circuit boards to resin, stamps to spices, integrated into the layers of paint. She uses different printing techniques, a palette knife or roller to build up layers in an exploratory manner and will then sometimes sandpaper it back, scratch into it and drip or pour paint onto the surface before adding more layers and finally working further on the details.

Emmie trained in Applied arts and first started exhibiting with a solo show in 2005 in a dilapidated church. Since then she has shown a number of times each year and regularly in London and Internationally. In the last year her work has been exhibited in London, New York, Miami, Hong Kong and Singapore.

At times she works from a studio or else is to be found on the move sketching, painting and exhibiting from art residencies. These have included working from a cave complex in Cappadocia in 2012. Her following work evoked this area of bizarre rock formations, caves, churches and pigeon houses sculpted into the soft sandstone. In 2014 Emmie returned to Havana to research further this intriguing city of laughter, music, repression and colourful crumbing structures that has been of such influence in previous work. Here she became involved in an experimental printers collective and intercultural exchange programme. In February 2016 she set out on an expedition to Ladakh ‘The Kingdom in the Sky’ in the Himalayas documenting some of the ancient monasteries, temples and ways of life. During this time she ventured into the remote Zanskhar valley the only access in the winter is a precarious journey along a huge partially frozen river to remote villages whose high mountain passes are cut off by snow. Despite the cold and treacherous conditions with paint brushes freezing at sub zero temperatures it proved to be very inspiring and peoples worth and hospitably unforgettable. Sand, coffee, dried plants and watercolours were incorporated into initial studies and sketches, then larger scale work produced. Now working from a sailboat heading South the next chapter is set to unravel… 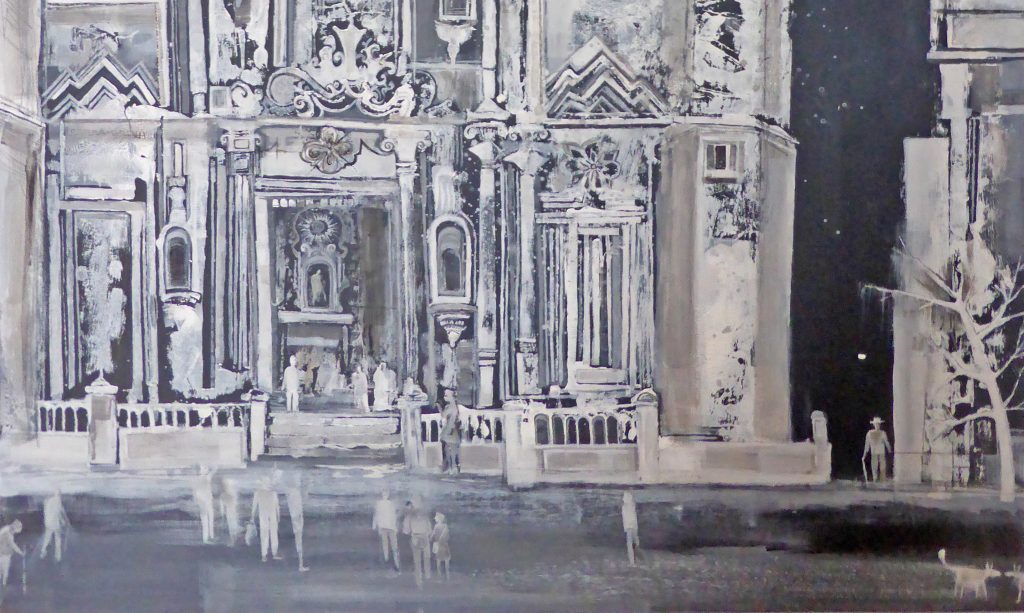