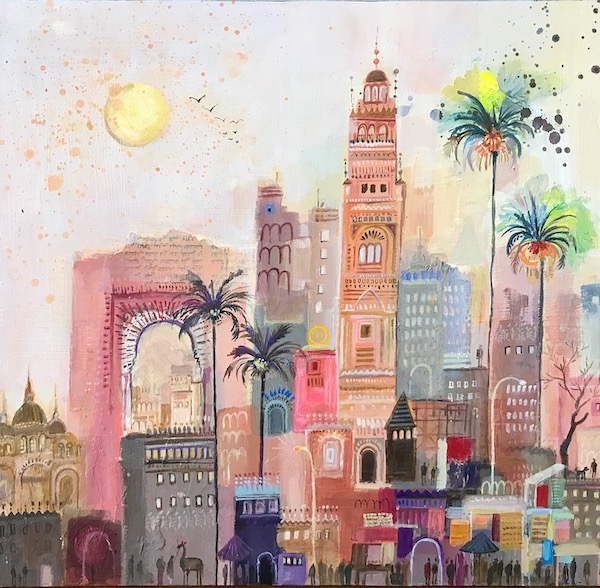 Corona Virus has bought chaos to many thing but of course all events are now off. This has bought the artmarket to a virtual standstill. However, it does give the chance for creatives to breath, experiment and create. Oxford artworks which has for many years been a very social event where artists welcome hundreds of people to their studios has now been cancelled but it has now been moved ‘online’. There is nothing like seeing a piece for real, the texture, the way the light moves on it, the colours changing. But, online a story can be told about a piece in a different way so it is time to get creative about how to show work in this increasingly, virtual world.

Over the next couple of weeks new pieces will be showcased and a collection of small work based on the topic given as a commission in the past ‘Make me want to travel’. This will be visible on this website and social media channels, please email info@emmievb to join the mailing list to receive up to date information.

An article has come out in OxMag about the work, to read follow the article or check it out below.

Work featured alongside other artists in the seaside section of Oxboxinabox

THE ART OF ADVENTURE

“One of the earliest journeys that inspired my art was a trip to Cuba in 2005. I returned home with the memories and colours fixed in my mind of a particularly unique land. I subsequently had my first solo show in an abandoned church and decided that life as an artist could be a viable option,” she explains. Fifteen years later, Emmie exhibits regularly in London and further afield. 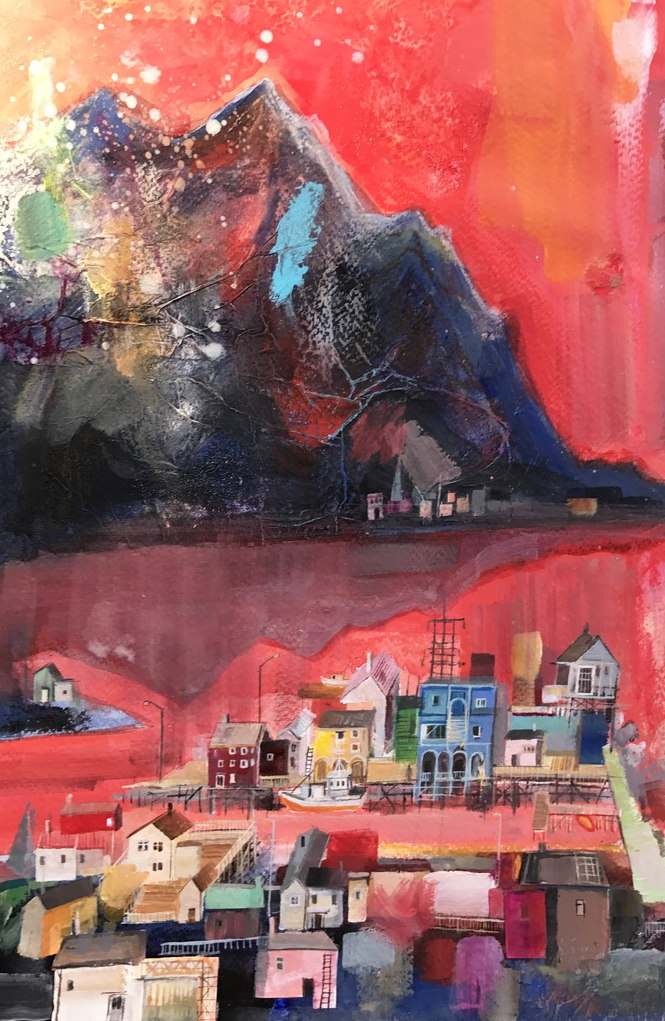 She is a mixed media artist who creates quirky, multi-layered paintings of beautiful and interesting places with a magic realism that combines the present, memories from the past, and sometimes thoughts of the future. Her art is inspired by journeys around the world, from the crumbling beauty of Cuban buildings, to the sensory kaleidoscope of India and the time-echoing features of Istanbul, and also by the mystical tales and bizarre sights she has encountered. She then creates each using both paint and a range of found materials including spices and coffee, infusing her work with the very flavour of the places in which she finds herself.She likes to collect memories as photos and sketches, and then gathers various mixed media en route to later repurpose in her paintings from not just paint but paper, sand, spices, leaves, shells or even amber. These are all put together to make a finished piece of work on board and canvas when back in the studio. As a result, many of her pieces take on a three-dimensional style, built from many layers.

In her whimsical buildings, Emmie often examines the transitory nature of architecture, from its construction to eventual ruins. “A building is a volume of human history, holding the stories and secrets of generations past and present,” she explains. Look carefully, and in each you’ll see Emmie has included creatures or other stories lurking in the doorways or windows that are not always seen at first glance. “This is typical of Latin American literature,” she comments. “It first inspired me when I was living in a shanty town in Peru. There the dwellings are made of all sorts of materials, whatever can be found, and both the buildings and the literature really opened my eyes to creativity in the face of adversity.”

Another of her pieces was inspired whilst she lived in a traditional cave dwelling in Cappadocia, a fascinating area of cave complexes in central Turkey. Here she documented the changing architecture, culture and people. The intricate layers of paint create a feeling of the old eclectic natural architecture, an amalgamation of representation where west meets east, with touches of the humorous and bizarre. 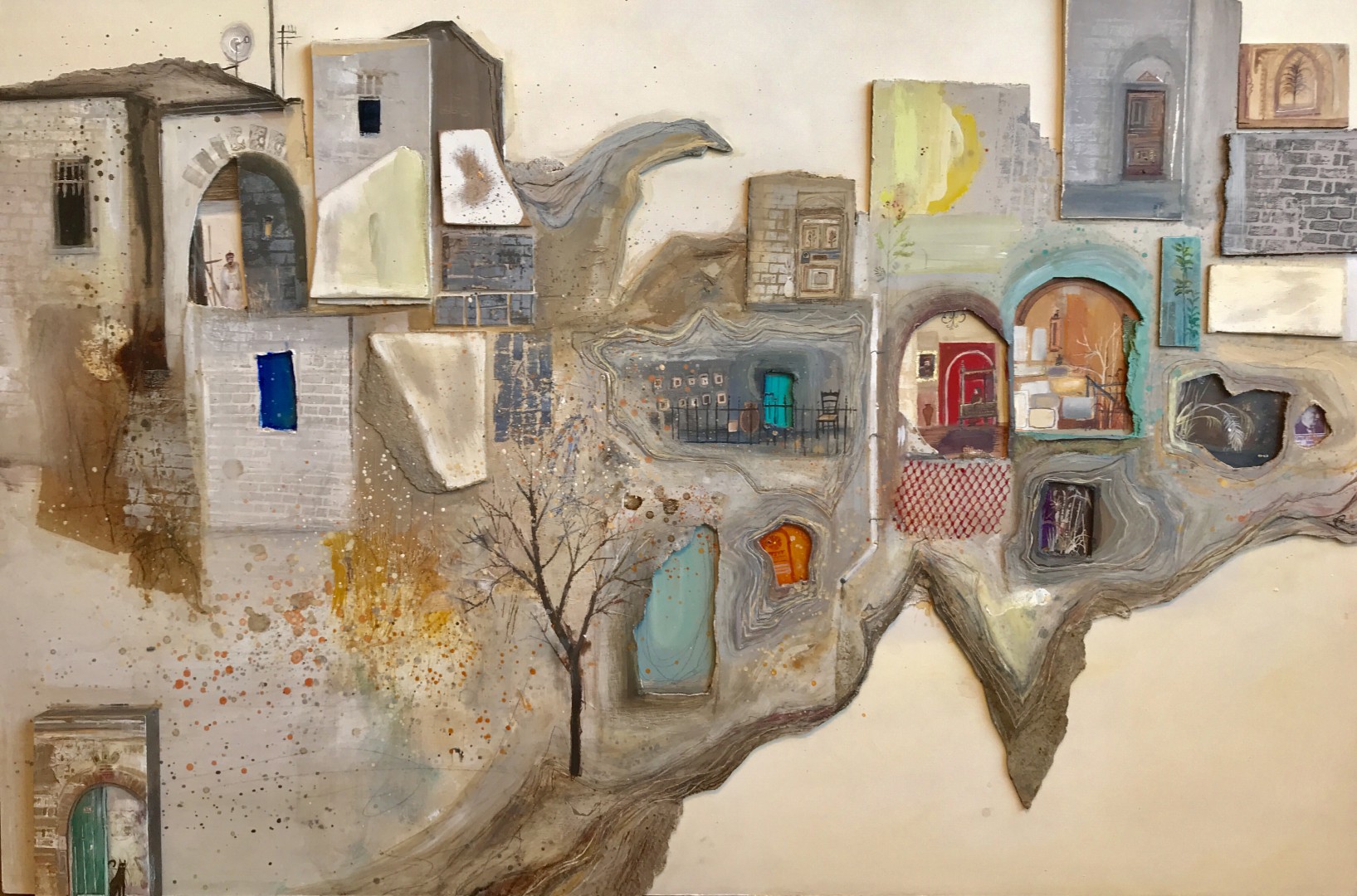 A more recent trip took Emmie into the heart of Rajasthan, India, where she was inspired by the magnificent architecture and colourful culture she found there. “I sketched an ancient temple, deep in the Polo Forest of Gujarat,” she smiles. “Perhaps over 1,000 years old, you can still see the intricate carvings of elephants, warriors and ways of life long forgotten.

“I often travel by motorcycle so I can reach more remote parts of developing countries and the people that live there. In India, I stopped to sketch women at work in the field. Their amazing saris were sparkling in the last golden light as the sun crept over the hilltops. I was soon noticed and joined the ladies to help cut and collect the barley, making new friends. Creativity and art is a great mode of communication between all cultures regardless of race, religion or status.”

Emmie now lives part of the time on a sailing boat, first painting a collection of work depicting Norway, and then some of Europe’s ports and towns across the infamous Bay of Biscay to Spain, Portugal and the Canary Islands.

“Travelling slowly means that I am often able to paint and sketch while moving,” she explains. “Coastal architecture is surprisingly unique and can only be appreciated fully from the water. At the same time, you must be aware of the changing weather since your whole world can suddenly tip sideways with paints, pens, water and half-made work scattering in all directions. Mind you, an unplanned wave might merge the colours on paper in interesting ways,” she laughs.

Emmie also describes her continuing fascination with Cuba where “there were scenes of intrigue on each street from shrubbery growing up through balconies, to walls stripped of their facades, rubble in the streets and skeletons of previously magnificent houses. 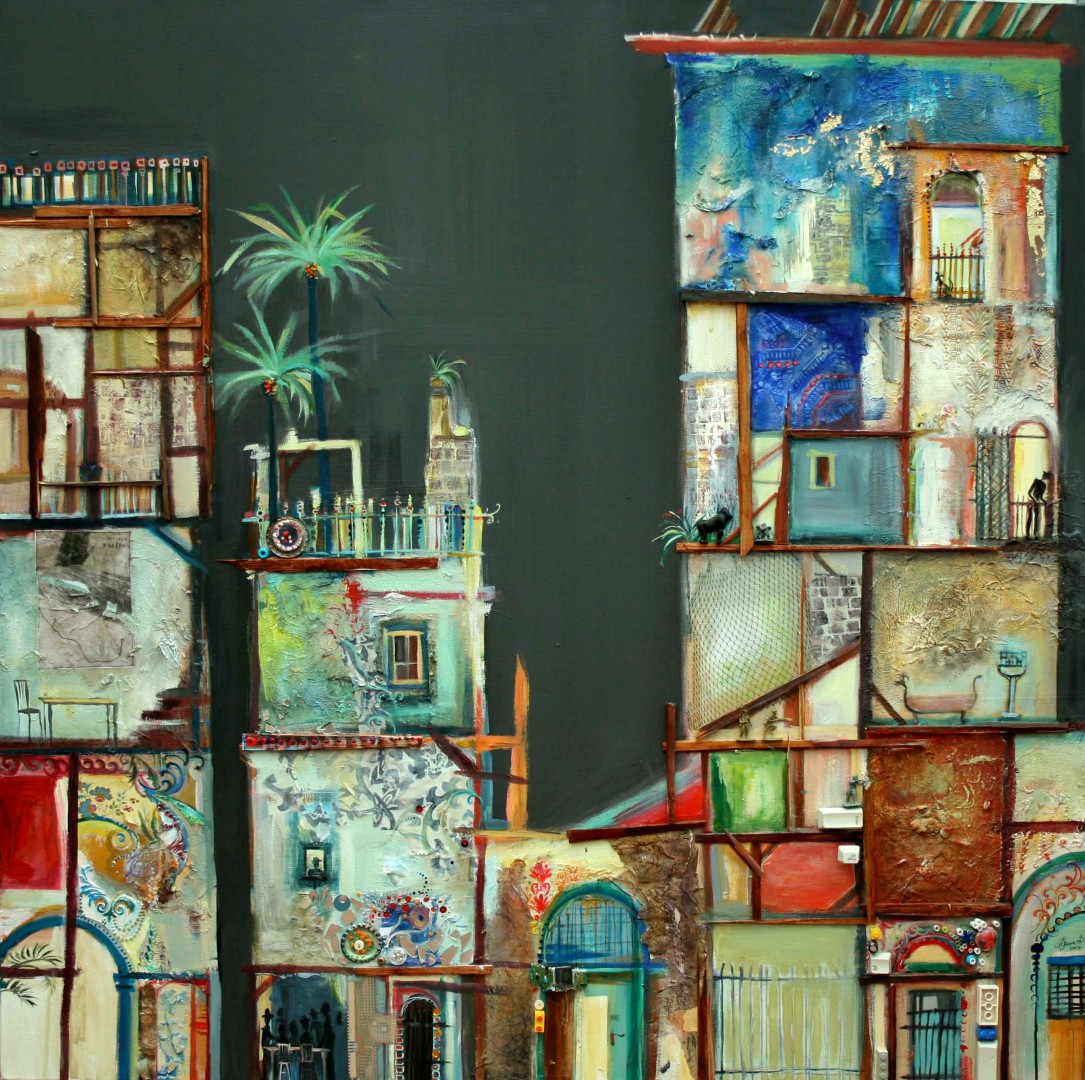 “However, sometimes you only need to step out of your doorway to find inspiration and adventures,” she smiles. “Oxford also reveals a wealth of untold stories, details and layered memories. The scenes you know so well can be a totally different place from one day to the next depending on the light, different people or even your own mood. Oxford with its secret corners and striking buildings is full of interesting sites to paint and explore. My favourite example is probably Broad Street which changes with the weather, or when the seasonal crowds of tourist, students and locals shape the street views.”

This year the annual Oxfordshire Artweeks festival (2-25 May) has been restricted by coronavirus to a virtual presence: visit artweeks.org and follow #oxfordshireartweeks on Instagram to enjoy the creative talent of hundreds of other artists and designers.