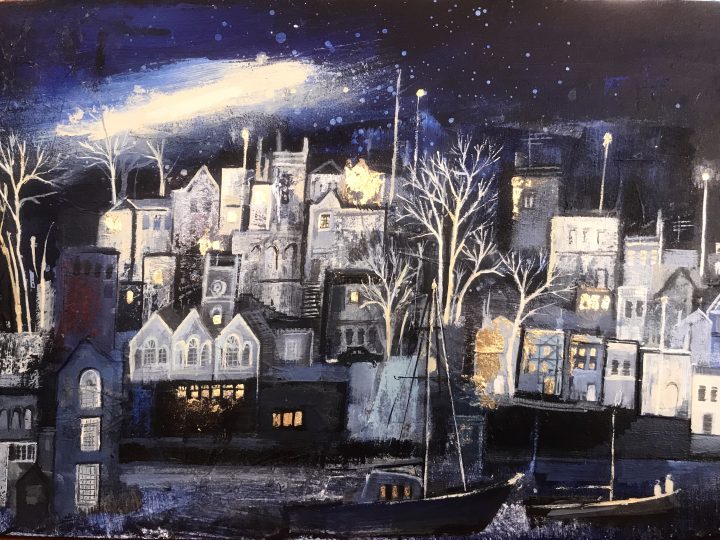 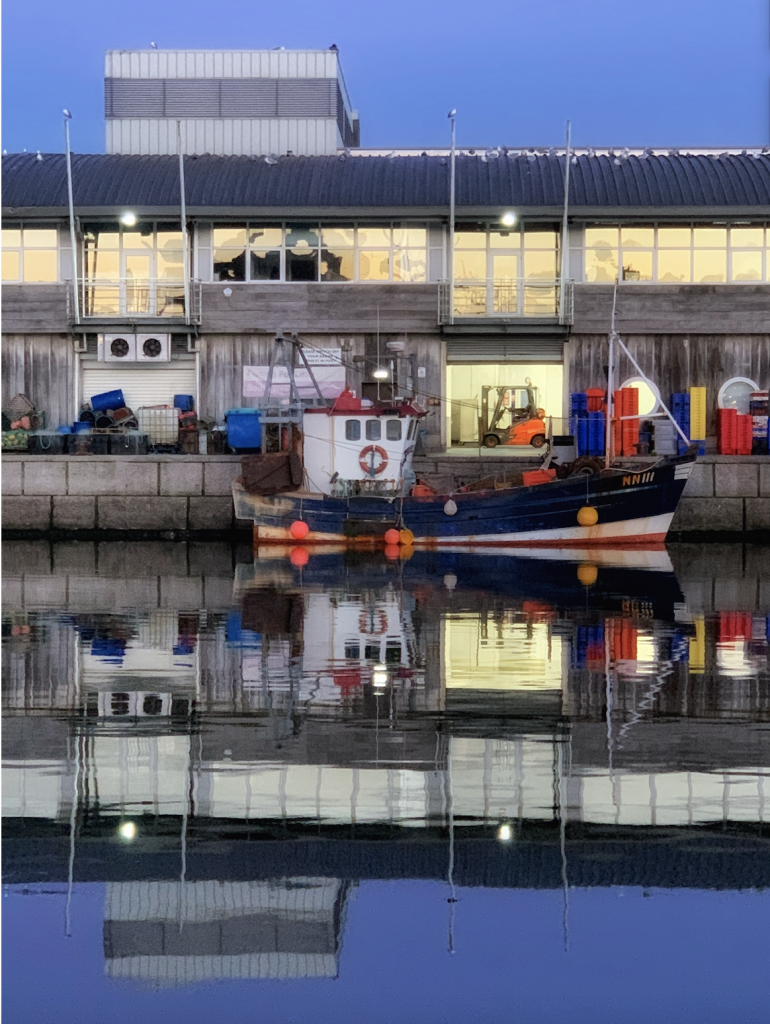 March: We moved onto the boat in March in Plymouth and were moored up opposite the fish market and watched the fishing boats coming and going with a constant stream of activity. Each boat unique with a different set up of buoys, antennas and fishing rigs. Its one of the busiest in the South West. Setting sail in a gail in March as the harbour mooring had come to an end after our we didn’t make it very far and that evening sought refuge in an anchorage about 2 miles away from where we had set off in a bay which is usually sheltered to a bumpy first couple of nights. The wind howled for the next couple of days while we finished the necessary boat jobs and got all provisions and equipment stashed.

April: The early part of the year was cold and even in April snow slowly drifted down one night covering the deck and Exmoor Downs in a soft white covering. My plans to do some more al Fresco was put off as the call of a working from a warm cabin beckoned! 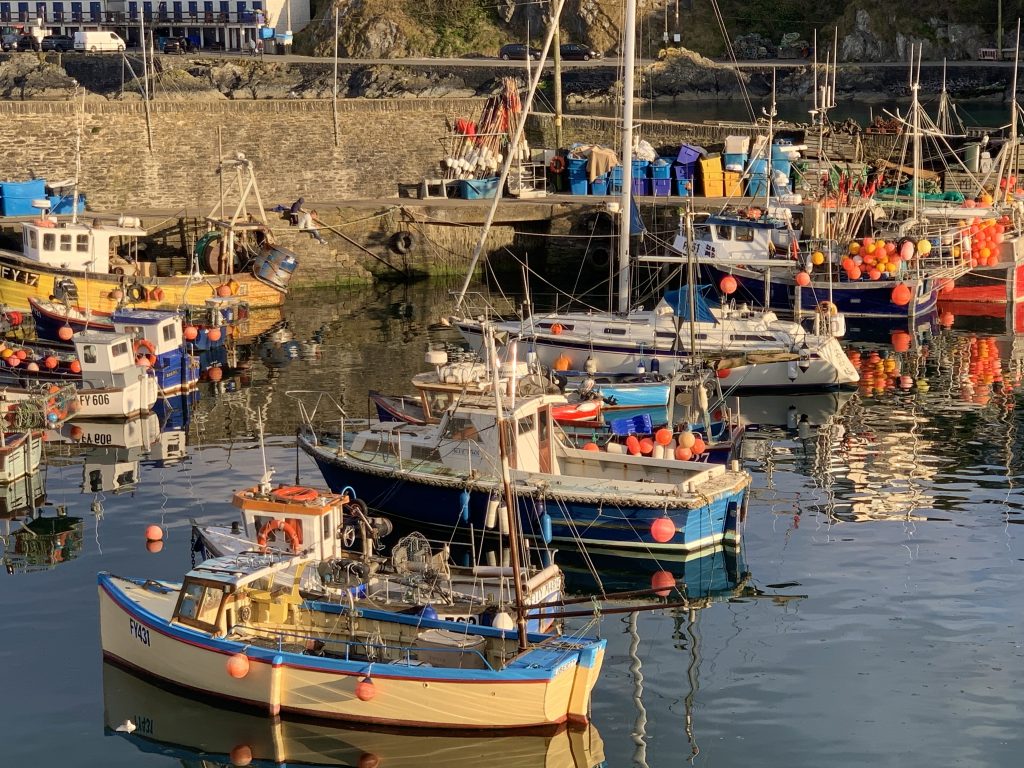 We did however, get out to explore the nooks and crannies of South Cornwall by bike on a flat calm days. I loved all the fishing boats with their colourful buoys attached which created beautiful reflections. On one day visiting Polperro sandwiched in a narrow valley the houses are quirky and right next to each other. My favourite house was one covered in shells making designs and patterns based on the area including Eddystone rock, an infamous outlying lighthouse, the first to be created on some seaswept rocks with the architect being kidnapped while making it and taken to France! 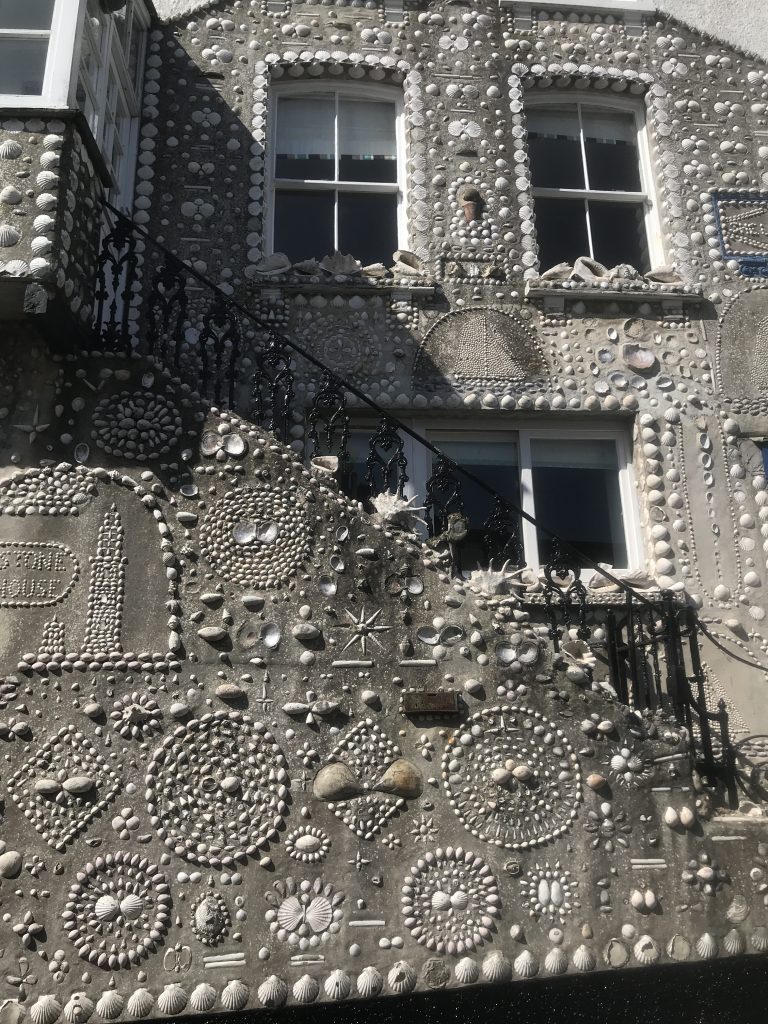 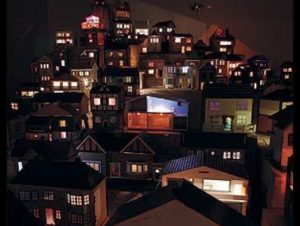 Below is a mixed media piece on board work based on a view of Falmouth at night I like the way the houses are layered ontop of each other, in some cases quite different styles and details but all looking out over the harbour. I did a rough sketch this during the day to be able to see better what was where and the composition but was particularly inspired by the scene at night and the lights twinkling like dolls houses on the hill side. The scene looked totally different to that during the day but serene at the same time. Reminded me of an exhibition I had seen with Rachel Whiteread’s work of a dolls house installation lit up in a darkened exhibition room and you felt like a giant walking through the scene. 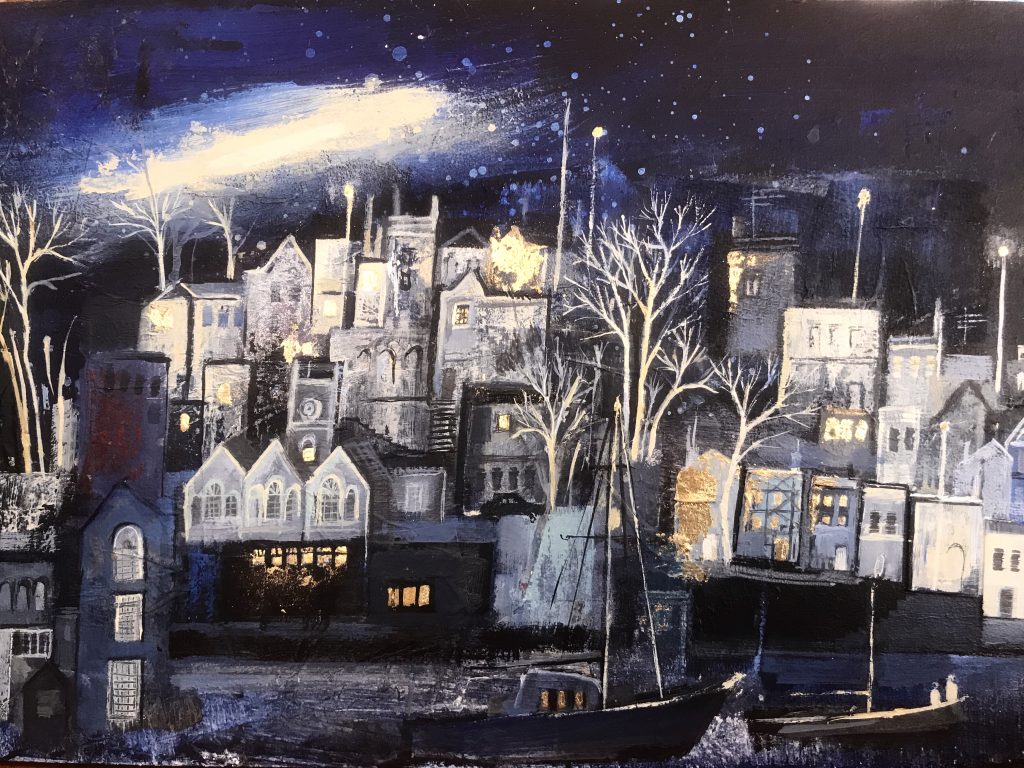 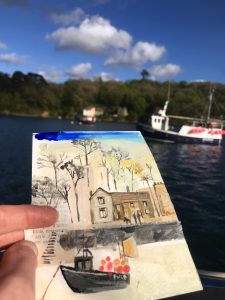 Did a dingy adventure up the river Fowey , spying this boat graveyard on the way. Makes you wander about how they ended up here, why no one was ready to do them up or did they get caught out by a bad storm and where simply irreparable after that. 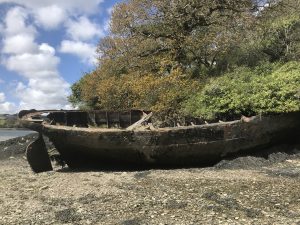 Could make some good sculptures. I read about one boat that had been in service only 15 years beforehand taking people up and down the river, she looked good at the time, having not received the work it needed on her though in repairs, she was left in the water and is barely more than a shell now. Amazing how quickly nature can take over again when buildings and boats are left. Would make some interesting paintings…

May: By May small venues, art galleries and studios were open or opening after the long winter of Corona virus lockdown. It felt really inspiring to be getting out and seeing some artwork for real in the flesh and appreciating the textures, the subtle hues and details after the drought of not seeing people creating work or the finished work. Falmouth high street had become alive with little private galleries opening their doors and a row of independent shops.  I enjoyed seeing the colourful sketchbook work at Falmouth Gallery of ‘traveling artists’ and the work they had created subsequently.

In late May a good crossing to the Isles of Scilly beckoned and we had a straightforward and relatively quick crossing round the infamous lizard which even on a calm day kicked up a little chop and has been the scene of many a ship wreck as the tide goes against the current and the wind sometimes creating savage conditions. However on a calm day you get propelled forward at double the normal speed and get to enjoy the ride.

June: The Scillies are made up of the most beautiful of colours, deep turquoise, blues and light yellows mixed with vibrant fertile greens and exotic plants which usually only grow in remote corners of the world. Fox gloves and bracken so big that you walk through them like archways. Heather on low bare lying island and barren rocks reminiscent of the Hebridian islands off Scotland. They are also very creative, people are attracted here by the colours but also the sense of being cut off at certain times of the year and able to create without the distraction of the fast paced world of the mainland. There are many hidden studio/gallery spaces and pop up exhibitions when you look for them. 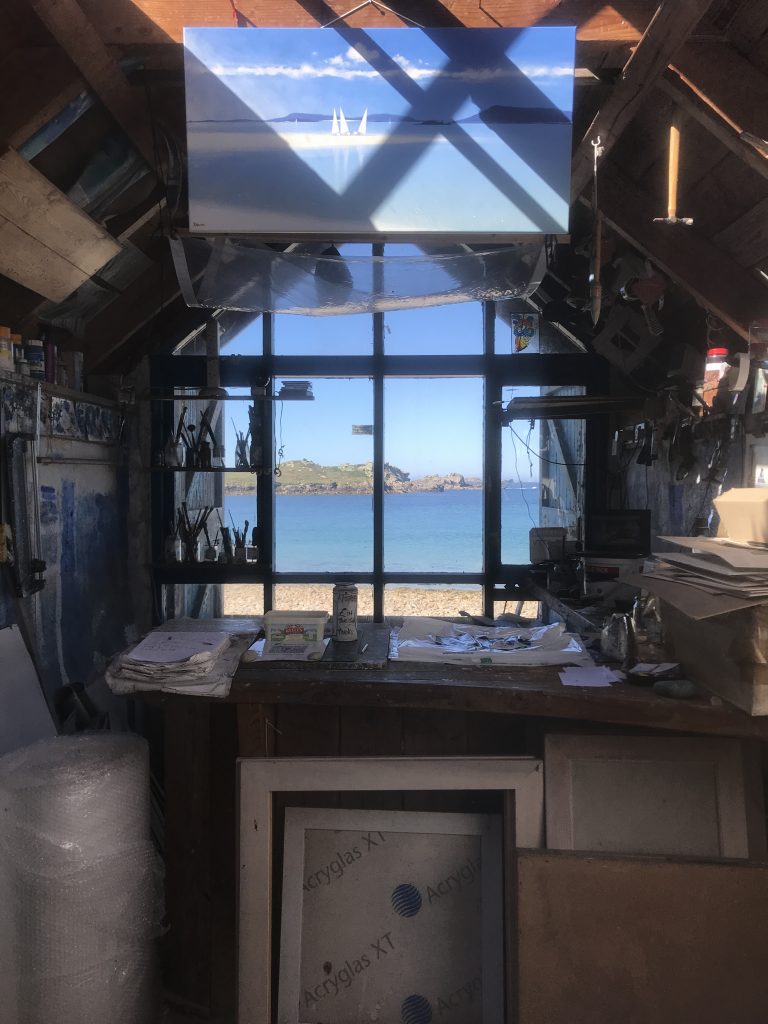